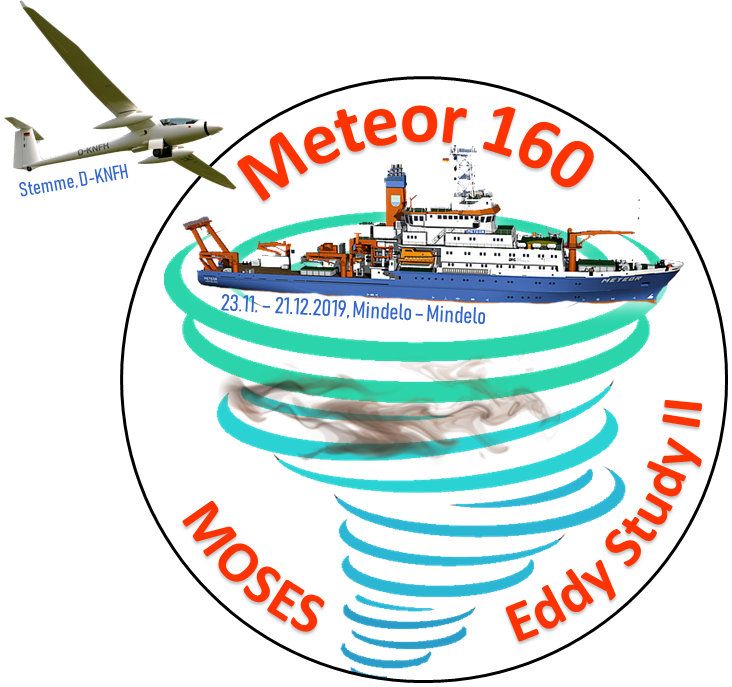 Northeast of the Cape Verde Archipelago

Tracks of deployed devices are open on GEMOAR Navigator.

The special issue will present results from the MOSES/REEBUS Eddy Study on the mesoscale and sub-mesoscale dynamics associated with ocean eddies of West Africa which was carried out on the German R/V Meteor cruises M156 and M160 in 2019.

During the run-up to the M160 expedition, potential eddy candidates were identified by applying different remote sensing products such as sea level anomaly, sea surface temperature, and ocean colour. Identified promising eddy features were further tracked for groundtruthing with ocean gliders deployed from the ‘Ocean Science Centre Mindelo’, São Vicente Island, Cabo Verde (www.oscm.cv). Two of the deployed gliders were equipped with an extended sensor set to measure conductivity, temperature, depth, oxygen, chlorophyll, and turbidity. In addition, two Saildrones (www.saildrone.com) equipped with biogeochemical and acoustic current sensors joined the eddy survey. After this pre-survey, two eddies with a strong and clear signature have been selected for a further and detailed investigation during the M160 expedition.

This further investigation consisted of a detailed two-step approach. As a first step, the eddy mesoscale properties were investigated. These investigations included the analysis of different physical and biogeochemical properties within the eddy water mass reaching a spatial extension of approx. 100 km in diameter and approx. 1200 m in depth. Based on this mesoscale-survey and with the aid of further remote sensing information on temperature, currents, and ocean colour, the exact geolocation for the following analysis was identified. As second analysis step, the sub-mesoscale eddy features were determined. This second-level investigation focused on the following sub-mesoscale eddy features: (i) the eddy centre with its sub-surface core, and (ii) the frontal zone at the eddy rim. The sub-mesoscale investigation was performed by the concerted deployment – of advanced observational devices. Those deployed devices included wave gliders, sail drones, Slocum glider, surface-tethered Lagrangian drifter, surface drifters, free-drifting sediment traps, marine snow catcher, particle cameras, microstructure profiler, a towed sensor chain, underway hydrographic radar observations as well as dye for a tracer release experiment. A very special device used during the M160 expedition to analyse the sub-mesoscale features of the selected eddies was a high performance self-launching motor glider (Stemme S10 VTX) from the Aachen University of Applied Sciences. This motor glider, based on the international airport Sal (SID) was used during several flights for parallel airborne observations of the sub-mesoscale eddy features. The recorded data such as temperature and ocean colour of the sub-mesoscale frontal features were transmitted to the R/V Meteor in real time. In total two cyclonic eddies have been investigated during the REEBUS/MOSES M160 expedition.

Within the coming months all collected data sets will be analysed by the different research groups. However, a first analysis of data obtained during M160 already shows some exciting features such as clearly enhanced primary production inside the eddies compared to ambient conditions in the region as well as very dynamic submesoscale fronts across the surveyed eddies.

As soon as first results are available, the data will be presented on international conferences and published in international research journals.
For further details on the REEBUS/MOSES M160 expedition, visit the Cape Verde Blog or visit Twitter #MOSESeddyhunt and see the weekly expedition reports (links blow).